Moving Linux to a new network 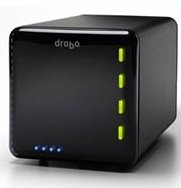 Recently when trying to put in another disk (two, going to three) in a Drobo, the Drobo did not see the new disk. I had slots one and two filled so I put the disk in slot three. The LED next to the drive never lit up and the Drobo Dashboard did not show the insertion of the new drive. Trying a different hard drive in slot three resulted in more of the same – it didn't recognize it.
So I put the new hard drive in slot four and it lit the LED green right away and the Drobo showed more space was added.
So, I contacted support – this is what they said:

This worked! Putting the disk in the third slot lit the LED green next to it upon reboot. I'm not sure if it was just the fact of rebooting the Drobo fixed it or these specific steps helped but all is well.